There is a debate going on about the usability of the AR-15 in a home defense scenario, and seeing that it is the most popular rifle in America today, we will try to shed some light on this topic.

Is a rifle the best option for home defense? The short answers.

For many people, the home defense equation is ONLY about stopping power and threat mitigation. In the case of those parameters, a rifle makes the most sense in a vast majority of the potential scenarios. That seems like a simple and straightforward answer. But that’s not the only thing to consider.

In this article, we’ll explore the other variables in the equation and bring up some food for thought, while proving, hopefully, that in the right configuration, the rifle can be a premium option for the majority of users in a home defense situation.

After all, if it’s good enough for the battlefield, and good enough for extreme tactical situations for law enforcement, then shouldn’t we be examining the fit for the AR in our own worst-case scenarios? Seems legit.

But is it really that hard to find a case against the AR for home defense needs? The short answer again: it’s not hard to find a reason to use something else, but that isn’t the whole story either.

The biggest reason an AR-15 isn’t a great option for some people for home defense use:

Potential for second hit from a high velocity, high-powered cartridge, or projectile. For some, this can be a deal-breaker. For others, that may be a secondary concern or maybe no concern at all. You’ll have to determine that for yourself. The facts are, however, that even though the .223/5.56 is berated by some for being sort of anemic in certain settings, penetration and velocity are not counted among its weak points.

The number one factor in any defensive scenario is generally how quickly and safely can you stop the threat. With a high-powered rifle, this is likely to be within 2 shots. More generally, a single shot on target will likely incapacitate a threat.

That may not be true of some shotgun loads, or handgun loads.

The value of a high-powered rifle in a sporting configuration is that it delivers high velocity, high energy, and high mass on target. The AR, while it may only be slinging 55 grain bullets in some cases, still allows for that. Sure, 55 grains on target isn’t the ultimate in stopping power, but it’s not a ridiculous notion either.

You can also opt for an upper receiver kit or fully built upper receiver, that can change the barrel length, rate of twist and add some defensive perks. That might mean moving to a .300 BLK, or a 6.8SPC, etc. 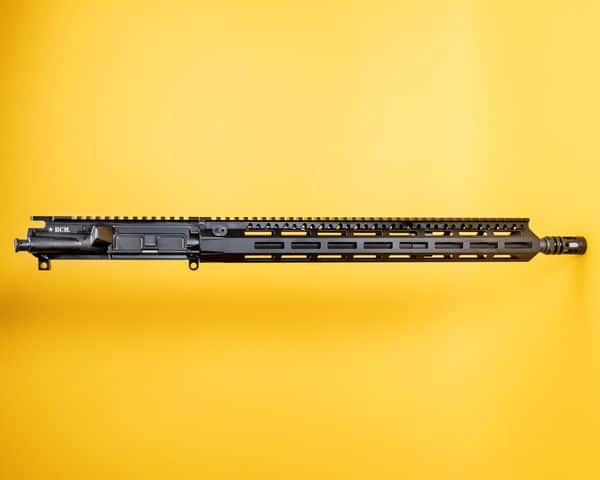 Those calibers are chosen specifically for their easy inclusion into a normal AR lower setup, and for their purpose-driven engineering that lends well to home and personal defense. Other cartridges may also prove effective in short range CQB type defensive combat.

If for no other reason than the variability of accessories and the ability to make the AR into something very unique and custom tailored to your needs, it is an ideal platform for the home defense market.

Friendly fire concerns and what is the real story here?

Pistol calibers lack the stopping power of high-powered rifle cartridges, and in the case of the AR platform, may still have the same overpenetration concerns. 9mm, .40 S&W, and 10mm will penetrate multiple residential walls in many cases. They are popular for stopping power and ease of use and mainstream adoption – but they won’t be as effective as a rifle round in the home defense situation, and still have risk of second hit probability.

The .45ACP might be safer thanks to lower velocities and a larger diameter, but still lacks the power of a centerfire rifle cartridge, like the 5.56/.223; .30 cal. or other similar offerings.

The best way to mitigate risk of second hit probability and friendly fire concerns is to plan for it. If you are shooting with a family member or a neighbor behind a threat, there is a risk. Period. You can use frangible projectiles, specialty loads, or other options, but a rifle will have its risks in that situation.

What’s the real story with friendly fire concerns? It’s under-discussed as a topic in home defense. It can also have a plethora of solutions. One that might make sense for AR purists is specialty tactical loads that have high energy dump and utilize specialty projectiles in 5.56/.223 or using a secondary cartridge like the .300BLK in a subsonic load with specialty projectiles. There are a lot of ways to address the concern. The best way? To know if a rifle is the right home defense weapon for you in your geographical location and given your household makeup.

The court case that is sure to follow in certain states

If you’re in certain states, you will be questioned, possibly detained, and possibly eventually prosecuted for certain defensive cases. You need to understand what your state and local laws are. We can never recommend breaking any law that is on the books. So, know what you can and cannot use to defend yourself in your home and even beyond.

Look at stopping the threat and no other alternative options. The intent of the law in these types of cases is that you are attempting in planning and preparation, and then in implementation, to stop a threat to your person, which would cause significant harm or death.

This is not legal advice, but if you are within the intent of the law, with proper legal representation, you will likely see a positive outcome as long as you know what you can and cannot do overtly.

Castle Doctrine, Stand Your Ground, and State laws, and understanding the big picture before you get into a defensive situation

Get educated. You may be surprised that what you hear on the news may not apply to you. Counties, cities, and municipalities have specific laws that differ from the state with regards to defensive use of firearms, firearms possession and use of firearms all the time.

Furthermore, your state laws change way more often than you may be aware of.

Your best legal defense – not that you should need to defend a choice to defend your home/family property, is that you were in fear for your life in the moment, but that you had made a plan to use the most effective mainstream tool to defend your home, way before someone chose to break the law and put you in danger by coming into it.

The AR, at least for now, is the most popular rifle in the United States. It is also a widely adopted firearm in use for home protection purposes. You are well within your rights, unless your state prohibits it, to choose this gun to defend your home and family. We recommend you get educated on your rights and responsibilities, regarding the use of an AR as a home defense option.

Some additional thoughts about using a rifle in the home

Rifles are loud! (Spoiler Alert: so are handguns and shotguns). But rifles can cause concussive injuries because of the amount of air movement, powder charge, supersonic noises, and other reasons in an enclosed space. They are likely to be the highest risk to your hearing of any home defensive option. But you cannot exactly wear heavy-duty ear protection and expect to know what’s going on outside your room with your natural senses. A suppressor might be a very good accessory to explore.

Even quick deployment hearing protection is likely to be ignored in a home defense scenario because of the speed of the timeline, and the urgency of the matter, mixed with lack of clarity, unknown threat parameters and a rush of adrenaline. You also want to maintain the tactical advantage of having your hearing, to see if you can understand the threat better.

A typical military load of the 5.56 or .223 (substantially similar) will easily penetrate at least three layers of drywall in addition to a side strike of a wall stud. Bigger cartridges will do much more than that. The small projectile has a tendency to flip or move significantly off track after a wall strike, but it’s no guarantee. The incredible velocity also lends to overpenetration and second-strike potential.

Using a 6.8SPC, or a .308 or another AR specific cartridge will increase those over penetration concerns, and second-strike potential. What’s the point? Stopping power and tactical superiority through firepower is not the only home defense variable.

Subsonic .300BLK can deliver a slight advantage in some of these aspects, but not by a lot without a suppressor, and a specific load/projectile build.

Anything more powerful than these rounds would be a ridiculous choice for anything where family members or urban population density are factors. In the case where a user lives in a condo or attached apartment/home, a shotgun or a handgun may be a better alternative. Dependent on layout and training, and risk factors for friendly fire: a rifle may not be ideal.

You must prioritize mobility and ability to move and turn. In most urban and residential domiciles, a full-sized rifle won’t make sense. The turning radius is too large. The advantage of having a rifle shouldered for stability, accuracy and ultimately so it’s harder to use the weapon against you, may go out the window if the rifle is too big to move freely, or engage without some distance. These are the realities of a home defense scenario.

It’s one of the best purely defensive options on the market for most people, if not because it is infinitely customizable, but because it is easy to handle, offers good mobility but good stopping power too, and it is a mainstream, easily obtainable firearm in most areas.

With the right planning, a strategically outfitted AR-15 or substantially similar clone would be an excellent choice for a vast majority of users in a home defense use case.

Time tested lessons to protect your home against intruders

Survival lessons from our ancestors that can still be used today

The #1 survival tree you should grow in your garden

More Than A Dozen Reasons To Practice Self-sufficiency Gardening

How Long Will an EMP Disaster Last?

Your free subscription includes news and specials sent by email in accordance with our trusted Privacy Policy.

More Than A Dozen Reasons To Practice Self-sufficiency Gardening

30 Kitchen Items that Work When the Power is Out

Steaming Food on a Campfire (14 Recipes)